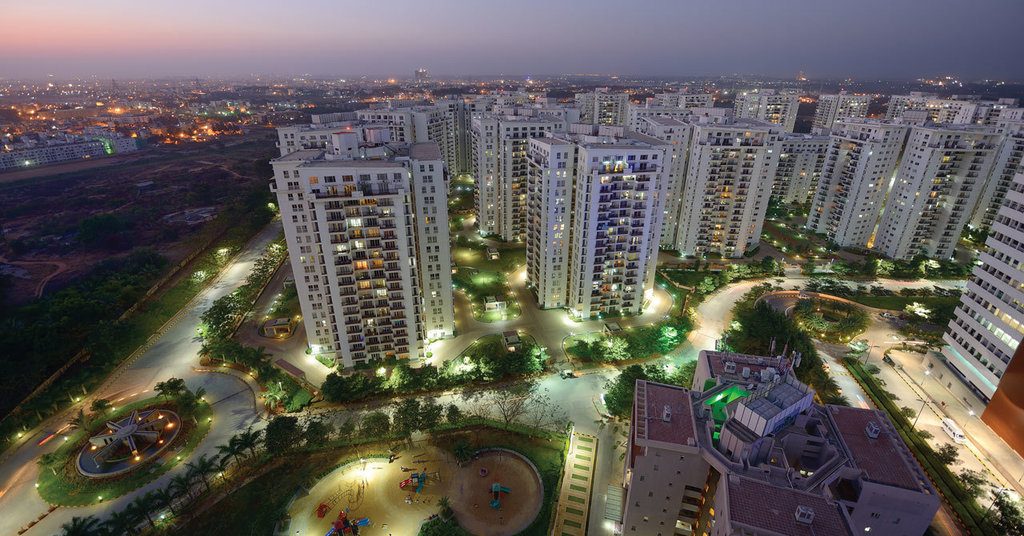 With around 1.35 billion people, India is the second most populated country in the world just after China. The performance of the GDP of India has been really impressive in the last few years compared to many emerging economies (Exhibit 1) and the value added by the real estate sector to this GDP has also been significant.

People from the rural areas prefer to shift to the Tier I, II and III cities with the hope of getting better jobs with good wage rates and for availing a better standard of living. With this rise in urbanization, the problems which started were severe housing shortages, extreme demand of basic amenities like water, sanitation leading to extreme urban congestion. Under such circumstances, when the prices of housing units in the cities are exorbitant (Exhibit – 5), then an initiative like affordable housing was urgently required.

The concept of Affordable Housing started way back in 2007, but due to some challenges related to land and high construction costs it took some to come into light. In 2015, ‘Housing for All by 2022’ was launched by Indian government with a target of building two crore homes across all urban locations in India. Parts of initiatives of the Affordable housing are as follows:

How the Government is working through this plan?

The concept of Affordable Housing is an initiative towards balanced growth in the economy. Share of LIG (Lower Income Group) and EWS(Economically Weaker Section) are biggest in the total population and the scheme is targeted towards them. However, every income group of the society will be able to take the advantage from “Housing for all by 2022” mission. Many more schemes had also been announced as a part of this housing Plan. CLSS or Credit Link Subsidy Scheme is such a plan where an interest subsidy of up to Rs. 6.5 % has been granted for availing a housing loan under it.

What is the performance of this plan till 2018?

Affordable Housing does not mean availing  houses at cheaper rate always, but with the several consumer friendly plans, government is trying to make the overall house buying process easy.

According to the latest report, 1.53 crore houses have been constructed under the flagship housing scheme Pradhan Mantri Awas Yojana between 2014 to 2018. In the FY2019 budget, the Government had also announced an affordable housing fund, which is expected to provide more exposure to the affordable housing loan segment.

The commercial real estate has undergone many changes over the years. As a part of such changes, the concept of traditional offices has decreased with the rise in flexible, optimized and shareable working spaces. A Co- working space refers to an office area where all the employees work together in an open space rather than divided by several cubicles. In case of shared offices, different organizations work in a shared space or floor. It helps to split the rental/leasing amount.

In recent years, India has also developed a working culture based on coworking space, especially in the metro cities. Mumbai, Bengaluru, Delhi- NCR, Kolkata, Hyderabad, Pune have emerged as the too preferred location for this. In 2016, 0.73 million square feet was absorbed for co working purpose. According to a report, seating capacity of the employees is more than 7,300 in the 30-floor office of the Walmart owned Flipkart in Bangalore.

Increasing operational activities of entrepreneurs, emergence of start-ups in various industries, flexible work environment, lower rentals are among the various reasons behind the rising interest of co working space in India and abroad. In the coming years, the market of co working space is expected to expand significantly.

Green building refers to both a structure and application of procedures that are environment friendly and resource efficient throughout a building’s life cycle (i.e. from planning to design, construction, operation, maintenance, renovation, and demolition). The concept of Green building is a part of Sustainable Real Estate Project and India is one of the leading countries in that case.

A building can be green building if it promotes

The US Green Building Council (USGBC) is the creator of LEED (Leadership in Energy and Environmental Design) is the most widely used green building rating system in the world. LEED is also world’s most widely used green building programme with 96,275 registered and certified cases/projects in more than 167 countries and territories. According to the LEED green building rating system of 2018, India ranks 3rd globally in terms of green technology project and built up area with a capacity of 24.81 million Gross Square Metres of LEED certified space in 2018.

India’s green building market is estimated to double by 2022 with the capacity of 10 billion sq ft. It is expected to be valued around US$ 35-50 billion with the help of increasing level of awareness among the mass and government. This type of building can reduce the energy consumption by 20%-30 %, water usage by 30%-50 % and significantly reduce waste generation by extensive recycling.

Ten to fifteen years back the Indian real estate market used to get driven by the metropolitan cities like Mumbai, Kolkata, Delhi, Chennai, Bengaluru etc. However, in recent times, the scenario has changed. Along with the existence of tier 1 cities, the importance of tier 2 and tier 3 cities has also grown over the years. Previously, cities used to get classified into Tier 1,2,3 based on their population. Otherwise, the cities in India also get classified based on the grading structure revised by the government of India for providing Housing Rent Allowance (HRA) to the employees across the different cities of the country.

As a part of a nation’s overall growth, the developmental work just cannot be restricted to the Tier I cities. It needs to be spread out to the other parts of the country as well. So, the emergence and rapid expansion of these Tier II and Tier III cities are just an outcome of it. Along with the existence of multiple advantages like better standard of living, exposure to several opportunities for maintaining a healthy and flexible lifestyle, various job options, the tier 1 cities are also extremely commercialised, expensive and congested. Overflow of population in such cities actually has created higher demand for all types of space, especially the commercial one (Exhibit 9). Besides, the scarcity of land resources, higher cost of land and construction, unaffordable property prices leading to declining demand and high inventory levels are diverting the developers to shift their focus towards Tier II and III cities.

Investment of FDI, establishment of MNCs, rise in the job, arrival of young population from other states, increasing presence of skilled labours are the reasons behind the growing urbanization leading to increasing demand of real estate activities in these cities. Though, compared to Tier 1 cities the share of investment is quite lower in the Tier II, III cities, still they are expected to grow at much faster rate in the coming years.

Accessibility of land and labour at reasonable rates compared to metro cities are the key drivers for availability of the real estate location in these cities. This lower land costs will lead to affordable rates of residential and commercial units and rentals. Cities such as Chandigarh, Vadodara, Jamshedpur have been used as the chief hubs of e-commerce. On the other hand, Coimbatore has more than 25,000 SMEs while Vizag has been suitable for industries such as mining, heavy manufacturing, etc. Jaipur is leading in service sector investments.

Smart cities are expected to improve the standard of living of all citizens through smart and sustainable technology. A city can be regarded as smart if it incorporates Information and Communication Technologies (ICT) to enhance the quality and performance of the services like energy, transportation and utilities in order to reduce resource consumption, wastage and overall costs.

Around 33% of population in India reside in the urban areas. With the increasing rate of urbanization, urban areas are expected to be the house of more than 40% Indians by 2030. This requires comprehensive development of socio – economic, infrastructural, technological and overall development of these all cities so that people can find it useful to stay there.

Which components are mandatory for creating a smart city?

In India, the Smart City Mission was launched by Government of India in 2015 with a target to develop 100 smart cities across the country. In January 2016, Government announced the list of 20 cities to be developed into the smart cities by 2021.

The duration of Smart City Mission is five years. Since this announcement, the first lot of 20 Smart cities need to be ready by 2021. The Smart City Mission is one of such projects which are about to have long incubation periods. Some parts of the development process are said to be done. During the time of launch, the overall mission had a budget of INR 48,000 Crore along with the plan of investing INR 500 Crore for each of the Smart cities in the period of 5 years. However, the budget increased with time based on the requirement. The Smart City Mission witnessed a huge growth in 2018. According to recent reports, currently projects worth INR 51,000 Crore are under implementation, out of which projects worth more than INR 9,000 Crore are complete. If the activities continue like this then we can definitely expect a faster accomplishment if the target.

Though the accomplishment of smart city plan tops the priority chart, still it has a long way to go to fulfill the dreams based on the current status of smart city project.